The war continues. Even though the media coverage in America has diminished in recent days, the fighting has not. Please do not diminish your prayers. Reports are that the Russians have taken thousands of civilians as prisoners, perhaps to use for prisoner exchanges or for propaganda displays on May 9. Also, thousands of children have been taken to Russia, being separated from their families. The purpose behind this has yet to be realized.

The good news is that many people are hearing the gospel. Our church members and our college graduates are faithful in ministry. Below is a photo of a Bible study being led by Kostya Grinyuk, [bottom right] who along with his wife Katya graduated from the college a couple of years ago.

Working with them are Sasha and Ira Kudlayev, also Bible college graduates. Please put these couples on your prayer list. They live in a town just south of Kyiv. 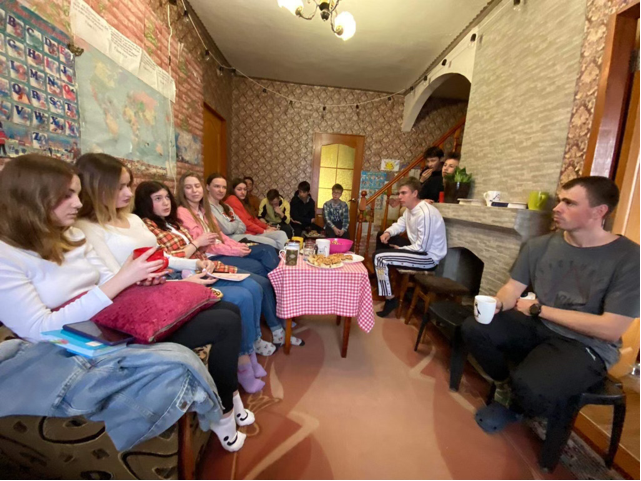 We hear accounts of prayer meetings and Bible studies in other countries also where our people have gone. Dennis Shamrov and his wife Albina have been able to get documents which allow them to live and work in Poland. A large number of Ukrainians have come to the church where they have been attending. Since these refugees don’t speak Polish, they need someone who can speak their language. So the pastor of the church has asked Dennis to teach them. The Word of God is available to those who want to hear. God has supplied a man who is a very capable Bible teacher.

Igor Smolyar, a college graduate who pastors in Zhitomir, has been involved in ministering to people who have been bombed out of their homes. He went to the front lines last weekend to preach the gospel to the military and others in the war zone. He found audiences who are ready and willing to listen to a message of eternal life. Pray that many will come to faith in Christ. The enemy means to use this war for evil, but God can take all things and make them work together for good.

I have received a number of letters from people who are concerned about things they have read on the internet that Ukraine is rife with corruption and anti-Semitism. Their reaction is that America should have nothing to do with Ukraine. Is there corruption? Of course, just as there is in America. But the Ukrainians don’t want corruption, and they certainly are not fighting to preserve it. They have been attacked and invaded without provocation. They deserve our prayers and our support. Of the many European countries I have been in, Ukraine is the most open to the gospel. We have been seeing great advances in biblical Christianity throughout Ukraine.

The question about anti-Semitism is serious. I have lived in Ukraine for 26 years. I have taught in Messianic Jewish churches, I have visited numerous Jewish organizations and have met their leaders. They will tell you that Ukraine as a nation is not anti-Semitic. One of our Bible college graduates taught Hebrew to Ukrainian Jews at a Jewish community center in Kyiv for several years. She just recently said that there is no policy of anti-Semitism in Ukraine, nor is there any policy of toleration for anti-Semitic acts. In fact, there are laws that forbid anti-Semitism.

Here is an excerpt from a recent article that addresses the issue:
KIEV — A leading Ukrainian rabbi said on Wednesday he saw no sign of hostility toward Jews from nationalists but was cautious on whether there could be a rise in anti-Semitic threats.

Russia brands some groups that helped to oust President Viktor Yanukovych as neo-Nazis, highlighting their admiration for Ukrainians who fought against the Red Army in World War II as one of the reasons for Moscow's takeover of the majority Russian-speaking Crimea.

But Moshe Reuven Azman, a senior rabbi in the capital Kiev, told a news conference he was not aware of new anti-Semitic acts since Yanukovych's fall [in 2014] and had not heard anti-Jewish statements from leaders of far-right parties. He cautioned against speculation on the issue being "exploited" for political ends. "There's no big, general Ukrainian problem," Azman said.

One pastor recently wrote and said:

The Ukrainian people are not fighting to maintain corruption or to fulfill the ambitions of the World Economic Forum, they are fighting for their liberty, their homes, their families, their land, their livelihood. All of this other stuff [anti-Semitism, etc.] is just clutter and irrelevant to the main issue.

Phyllis and I are leaving today (Apr 29) for Armenia where I will be teaching a Bible college course on “Man, Sin and Salvation.” Please remember to pray for us as we travel and seek to minister the Word in the city of Yerevan.

We are grateful for all the support we have received to help the Ukrainian people. We are distributing funds, clothing and other items to our people in Ukraine and in the other countries where they have become refugees. Thank you.