Dear Servants of the Most High God,

We are so pitiful, so insignificant, and yet we can approach the very God of the universe. In this verse David expresses his amazement that God knows us. The word “man” occurs two times in the this verse. The first time it is the generic word for a person, a member of the human race. God knows the individual human. The second time the word “man” is used is a different word, emphasizing the frailty of man. In spite of this, God is “mindful of him," that is to say, God has a plan for him. Think of it! And because of this I can bring my petitions, my supplications, my heart’s desire to the Lord.

I had a marvelous time today teaching an online Bible class to our Ukrainian Christians. The class lasted almost two hours because of the Q&A session that followed the lesson on Psalm 144.

Question: what if Russian Christians are praying for victory?
My family in Russia tells me that we should just give up and submit. What do I tell them?
I am from Belarus and my family wants me to fight against Ukraine.

The last two questions were prefaced by remarks that their families have been bombarded with constant propaganda from the Russian media which paints Ukraine as the aggressor, the evil nation that desires to commit genocide against the Russian people. Ah, the media. What a powerful force – for good or for ill.

Psalm 144:11, “Rescue me and deliver me from the hand of foreigners, Whose mouth speaks lying words, And whose right hand is a right hand of falsehood--”

They say one thing but do another. They speak peace and then bomb your houses. They speak of cease fire while increasing their missile attacks.

It is good news that the Russian forces are withdrawing from the Kyiv region. But they continue to point their missiles at the city. Even though they have left Irpin, just to the north of Kyiv, they leave behind destruction, and they have also left behind land mines which can kill and injure anyone who might step on them—children in playgrounds, entrances to businesses. 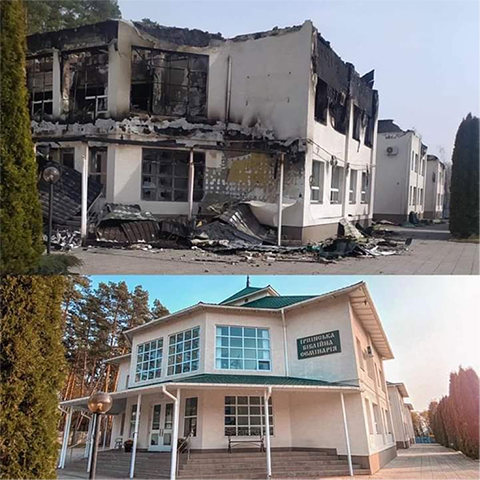 Irpin Bible Seminary – After and Before

I have a new prayer request. The report today is that Americans in Russia are now being sought out and detained. Those who have made it to the Russian border are being taken into custody. Why? They have done nothing illegal and the US is not at war with Russia. Also, the Americans in Russia are in a tight spot because they have no access to their bank accounts and cannot use their credit cards because of sanctions against Russia. I ask you to pray for Steve, a long time missionary in Russia. There are others, too.

Thank you for your prayers, your encouragement, your support.