We bring you good tidings of great joy which shall be to all people, for unto us a child has been born, and unto a Son has been given. His name was called Jesus, for He saves His people from their sins. So we proclaim the praises of Him who has called us out of darkness into His marvelous light. That light is the light of men, the true light that lights every man coming into the world. Thanks be to God for His ineffable gift.

The year’s end is upon us. How the past 12 months have rushed by. Of course, time isn’t going any faster and perhaps we are all going slower, but one thing is certain, our salvation is nearer than when we first believed. Our time is a gift from the Lord to be used wisely to accomplish His purposes and we are commanded to redeem time. As stated in the epigram:

Only one life, ‘twill so be past
Only what’s done for Christ will last.

Whatever time the Lord gives us in the future, may it be spent to accomplish His purpose. This will, indeed, make it a happy and blessed new year. 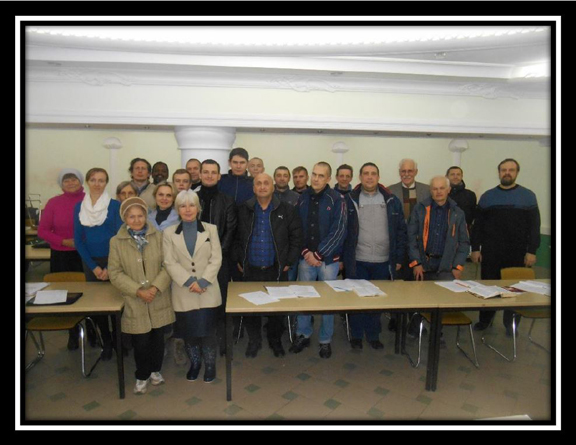 Upon our return to Ukraine from our summer tour in the US, we immediately immersed ourselves in the work. We opened the new school term at Word of God Bible College with my teaching a course on soteriology, the doctrines of salvation. In October I taught a survey of the 12 Old Testament historical books. Right after that I worked with Mark Musser and his team in teaching Galatians and Life of Christ modules of DM2 material. Then it was off to the east of Ukraine (five and a half hours on the express train) to the city of Kharkiv to teach a two-week course, “Man, Sin, and Salvation” at Ron Minton’s International Baptist Bible College.

Phyllis and I went to Israel for two weeks to attend a Christian Leaders conference held at Yad Vashem, the Holocaust Museum in Jerusalem. This was a 50-hour conference designed to educate Christian leaders about the Jewish holocaust that took place under Adolph Hitler. This was a very sobering conference as it presented facts about the slaughter of more than 6 million Jews as well as prevailing attitudes among Europeans at the time who knew what was going on and either approved of it or chose to ignore it. The anti-Semitism seen in Hitler was also widely held among many other nations in Europe. In fact, more than one fourth of the Jews were murdered, not by the Nazis but by groups and individuals living in countries occupied by the Germans and who were sympathetic to their philosophies.

The single driving force behind Hitler’s schemes was his long-held hatred of Jews and an intense desire to rid the world of every single one of them. In his book “Mein Kampf” (My Struggle) he declared that he believed he was doing the work of the Lord in seeking to destroy the Jews. Just before he committed suicide he wrote in his last will and testament:

“… But before everything else I call upon the leadership of the nation and those who follow it to observe the racial laws most carefully, to fight mercilessly against the poisoners of all the peoples of the world, international Jewry.” 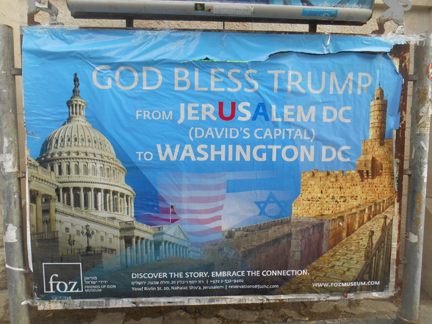 We see anti-Semitism rising again in Europe, and, indeed, around the world as evidenced by the recent vote in the UN against America’s declaration that it would move its embassy to Jerusalem. Ultimately this is a statement of rejection of God and His choice of Israel. Yet, it is through Israel that the world is to be blessed, for the Savior of mankind came into the world a descendent of Abraham, Isaac, Jacob, and David.

May the Son of Abraham, the Son of David, whose birth we celebrate at this time of year, bring you peace and joy, confidence and stability, and purpose of life in the coming year.

One chilly and rainy evening while we were walking back to the hotel in Jerusalem, I noticed a long line of media vans with satellite dishes sprouting from the roofs. I commented to Phyllis that something was going to happen. Then we were surprised to see the American flag being projected onto the walls of old Jerusalem, followed by images of the Israeli flag, and then both together. We didn’t know what was happening at the time, but it was thrilling to see it, nevertheless. Unfortunately, I didn’t have my camera with me to get a photo. When we got to our room we turned on the news and watched President Trump make his announcement of moving the American embassy to Jerusalem. We did get a couple of pictures the next day which express the attitude of so many in Israel. 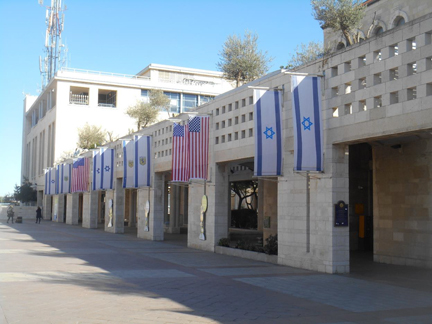 Our schedule for the coming spring is ambitious, with two courses to be taught at Word of God College, three weeks of teaching in Brazil and two weeks in Zambia. What a privilege we have to teach the Word, and what mercy the Father has bestowed on us in giving us the health and the stamina to continue serving Him.

We thank all of you for your prayers, your encouragement, and your support.