We are almost finished with our spring semester. It has been a whirlwind of activity since the first of the year. I taught two courses at Word of God Bible College, and two courses for the International Baptist Bible College. One course was in western Ukraine and the other in the far east of Ukraine. I wrote earlier about our trip to Brazil (April News Update), and after that I spent two weeks in Zambia and Malawi. 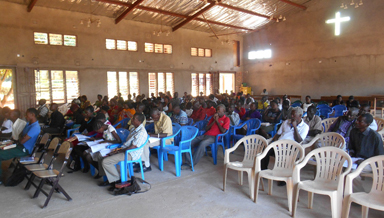 It was my first time to go to Malawi, a small country just to the east of Zambia. A couple of pastors had attended our conference in Lusaka, Zambia last year and invited me to come to their country. I flew into Lilongwe and took a six-hour bus ride to Blantyre, after waiting at the bus station for four hours. Needless to say, I was rather travel weary when I arrived. After a night’s rest I got up the next day and taught 8 hours. The next day was a bit of a breather with only 4 hours. The response was really positive and they clamored for more. I hope that I can return next year. In Zambia I did two week-long conferences, one in Livingstone and the other in Lusaka. I taught a survey of the Old Testament. Most of the people knew nothing about the Old Testament except for a few stories, such as the flood, David and Goliath, and Daniel in the lion’s den. They were really excited to learn about Israel, the divided kingdom, the captivities, and the reason why the prophets wrote their books. They asked for a New Testament survey for next year.

I just returned from my trip to Lysychansk in eastern Ukraine. This is one of the cities where there was fighting with Russian-backed separatists a couple of years ago when Russia took control of the Crimea and invaded eastern Ukraine. The Ukrainians have control of the city now, but it is only about 10 miles from occupied territory. There were numerous military check points along the road, and my train was two hours late getting in because we had to wait on sidings a couple of times due to military trains taking precedence on the railway.

The pastor of the church where we held the conference had an interesting story. When the fighting was taking place, he sent his family to Kiev. He stayed behind to be with the people of his church. One night he had gone to the church to be on watch. He got a call in the middle of the night that his house had been shelled and was completely destroyed. Had he stayed home, he might have been killed in the shelling. The church building was never attacked, but a school building not far away was taken over by the Russians. This became the site of a short but fierce fight between the two armies. The Ukrainians prevailed and the insurgents were defeated. What has not been widely reported in the news is that the conflict continues. Just in this month there have been at least 27 deaths and several hundred wounded. Since the conflict began there have been close to 3,000 deaths and more than 20,000 wounded.

Below is a photo of the school building. To my right is the pastor of the church. The other two men are pastors from western Ukraine.

In Lysychansk I taught eight hours a day for three days in a row, and finished up with four hours on Saturday. That is a bit of a challenge, but I was so pleased with the students who endured to the end. The response was enthusiastic and they want to know when I can come again.

Word of God Bible College will end the school year this week. We will have graduation ceremonies on Friday, our annual banquet, and then a special service at Word of God Church on Sunday.

Phyllis and I will fly to the US on June 5th and start our summer schedule. This year we will be visiting churches in the western part of the US, going to churches in Texas, New Mexico, California, Oregon, Washington, Idaho, Utah, Colorado and Oklahoma. We are going to squeeze in a short vacation and see our children and grandchildren along the way.

Click here for our summer itinerary and the churches we will visit. You can also find this on the Calendar on this website.

We praise the Lord for His mercy and grace that allows us to serve Him. We have been blessed with the health and strength to carry on. We are so grateful to all of you, for your prayers, encouragement and support. Thank you.